Simon’s qualifies for the final of the MID Sportsjournalists!

Does the “Golf God” exist?

If the answer is yes, then the Golf God was in a friendly mood towards our teams who participated in the Made in Denmark and Sports Journalists Junior Contest qualification on Hørsholm’s course.

At the beginning of the week there was a cancellation from Sophia Carlsen and so Rosa Barnak was called in to join the team.

A couple of days before the tournament we went for a practice game at Hørsholm and the greens on the course were rock hard and so the task was to figure out if the ball were to land 5, 10 or 20 meters from the green would it subsequently run in. It was not possible to land a ball close to the pin and the team went into hard training on their pitching and chipping

The team decided to continue with their aim of a top 4 placement which would get them through to the finals, even though the group had changed after Sophia was unable to play.

After the 1st round the team was in 5th place and it was 3 strokes up to Søllerød. Christopher was Simon’s best player and was in 5th place in the individual tournament. Over the lunch break everyone was keen to grab 4th place. The weather was lovely and the players all needed to keep well hydrated to stay focused and we were aware that we needed a couple of good rounds to achieve our goal.

After the 2nd round the team achieved the exact same score as in the first round, and now we had to wait to see if it was good enough. Casper was Simon’s best player in the 2nd round and also became Simon’s best and achieved a 7th place in the individual tournament.

Eventually all the results were in and Simon’s made 4th place in a tie with Hillerød, we continued to the final with a better score on the last 18 holes and the team picked up 7 strokes against Hillerød in the 2nd round. It’s important to note that Hillerød’s female junior national team player went down due to the heat.

The team sends its warmest thoughts to the Golf Gods who were with the team during this tournament.

We are already looking forward to attending the professional tournament at Skjoldenæsholm, in conjunction with the Made in Denmark Qualifier 2017 which takes place 2nd and 3rd of August 2017. 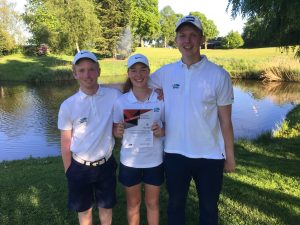