Senior Regional Team are ready for the final!

The “Dream Team” met at the driving range at Kokkedal Golf Club on Friday afternoon to play the semi-final against Dragør, who were in a strong position with handicaps that matched our own. Below is an image of the scorecard along with a picture of the happy winners.

We knew that it would be an exciting match and only our rookie Claus Kongsted seemed a little nervous, but it could also be his allergy to the driving range.

A little about the game:
Michael Fischer won 2-1 against a 1 handicap player, and was only 2 over par, GREAT and a lot of respect from the Captain …

Torben Jensen won 1-0 and sat with his legs up during the dinner as he had no water for 18 holes, and probably had cramp during the evening.

Claus Kongsted was nervous, but a shaking Kongsted managed to do his part and is still unbeaten.

Hanne Rix won 5-4 and probably had the easiest task, but played safe and won big.

Anne Nimand & the Captain won a surprising victory over a handsome Dragør Captain, whom we both knew. They were unbeaten and tried more psychic tactics on Anne as a joke and the match was eventually won on hole 18. 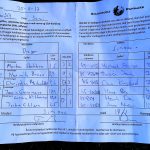