It was an uneventful match against the top 2 teams in the group.

On Saturday we met Furesøen 2 and on Sunday Kokkedal 2, both matches were played on away grounds. We were aware that we would be playing against 2 strong teams. The two teams usually get players to come home from various colleges and this means that in this round there is a small change in their respective 1 and 2 teams.

Kløver had been in the United States and the plane landed on Saturday around 07:15 and the first match was at 08:30, everything looked great, but then Kløver called to say that he had become ill on the plane on the way home and so we had to wake up Jonas and change our foursome. Perhaps this opt out had an impact on the result?

Jonas never really got into his match and lost 6/5. Jacob was very strong in the last division round, but unfortunately this wasn’t the case this weekend. Jacob lost his match by 5/4. Casper A. is usually the one player who normally wins, but this time Casper A. lost 3/1. William was already 3 down after 3 holes and the result ended in a 6/5 defeat. Casper N. lost his match by 4/3 to a player who had been pulled down from Furesø 1. It’s so hard to lose 14 – 0. Our foursome (Alexander Garde and Christopher Dyrling) were down by 4 after 9 holes. They were 3 down after hole 14. It looks like an early finish, but Alexander and Christopher want to change it. Hul 15 (Park 5 – a par 4 hole) was won with a birdie after Christopher hit his drive onto the green. On the par 4 hole, Alexander chose to use a driver and it lands like Christopher’s drive near the hole on the green, the hole is won by a birdie. Now we are 1 down and have 2 holes left. The next hole is a short par 3. Christopher places the ball a little outside the green, Furesø is on the green and has approx. 8 meters to the hole. Alexander chooses to put the ball against the flag and it rolls and rolls and then the ball disappears into the hole, three birdies in a row and the match is just up the last hole. The last hole is a par 5 hole. Alexander hit the drive a bit into the high rough and then Christopher hit and unfortunately the ball rolls a little into the high rough. Alexander hit it on and there was approx. 10 meters to the hole. Furesø landed on the green bunker in three. They hit have about 2 meters to the flag. Christopher puts a lot of cards and it is Alexander who stands with a putt of just over 2 meters and it goes in for par on the hole in order to win this match. Furesø does not get their putt in and we win a foursome for the first time this season. 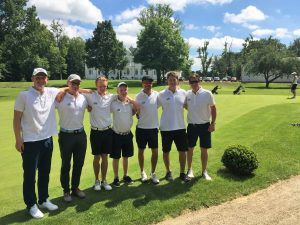 Sunday’s match was against Kokkedal 2 and as we had lost to home with 10 – 4 we had chosen to maintain our team position from the day before.

Today, Jonas was ready from the start and is 3 up after 5 holes. Jonas won his match by 5/4, that said, it was not Jacob’s weekend and the match was lost 5/4. Casper A., ​​met the same player he played at Simon’s, Casper wants to take it differently and moves forward quickly, the match is won 4/3. William is in a better mood today and met the player who was in the 1st team in the first division round. The match goes back and forth and William gets ahead with 2 and wins the match with 3/2. Casper N., is playing a college player who plays 18 holes almost every day. Casper remains in a positive mood even though he is being fed to the sharks and the match is eventually lost 6/4. We are ahead with 6-4, can the foursome repeat Saturday’s efforts? After 3 holes we are 3 up (they have won 8 holes in a row), but they are unable to keep up the momentum and after hole 12 we are drawing. We win hole 13 and are 1 up. They lost 14 but everything is still looking good. But we lost hole 15 and hole 16 and are now 2 down with a possible 2 back and if we win them, we win the match. Unfortunately hole 17 was par and we lose the match by 8 – 6.

The team has a goal to remain in the group, and we are ready for the next meeting.

They put up a good fight for the weekend, thanks for the effort.